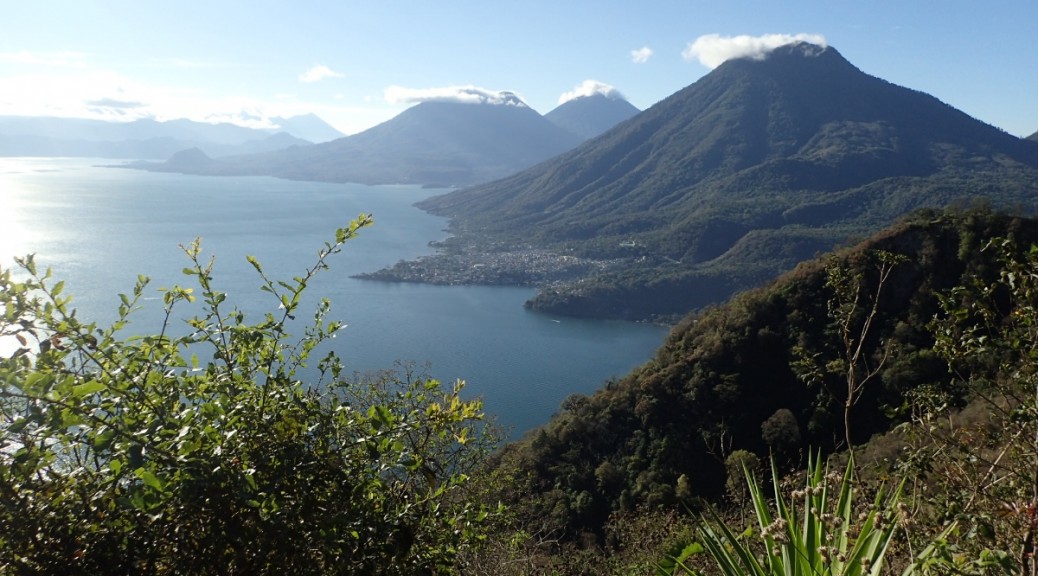 In the past three days, I did a Quetzaltrekkers hiking tour from Xela (or, more precisely, from the town Xecam near Xela) to Lake Atitlán. This 42 kilometre hike was more exhausting than expected. However, the nice views (especially on the last day over the lake) were well worth the effort.

Already at the start, we had a very challenging part: a two-hours-long ascent to our highest point at 3,050 metres above sea level. This may not sound too bad, but I found it exhausting nonetheless: Whether I still had some heavy legs from my volcano hike, or I had to struggle more with the (seemingly) heavier (and less comfortable) backpack, or it was simply the slightly faster pace of our guide – some of my leg muscles were always aching during the ascent. 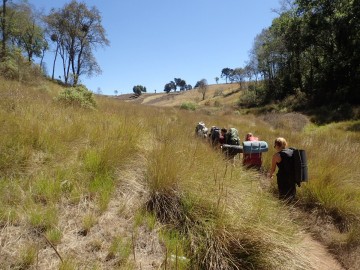 Just before reaching our highest point, we had to wade through some high gras. Soon after that, though, came the next blow: The path was very dusty and dry. So, we were more or less permanently walking in our own dust cloud. This was another damper on my motivation. 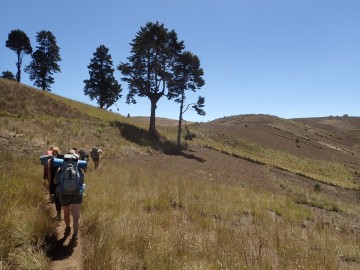 Last ascent to our highest point 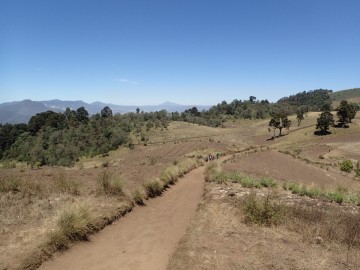 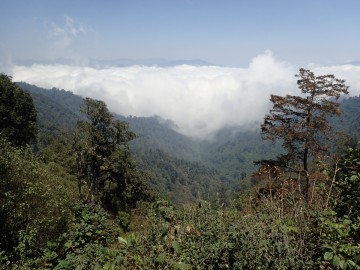 Clouds over the cloud forest

Right before lunch, some clouds moved in below us. This led to some very nice views. In the distance, we could also see the volcanoes of Lake Atitlán sticking out of the clouds. In combination with an excellent lunch(*), this cheered me up again. 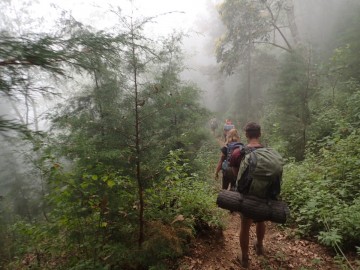 In the afternoon, we entered the cloud forest that was again true to its name. Finally, however, we had to hike for some one and a half hours on a dirt road. To me, this dragged on endlessly. I was very glad to arrive at Santa Catarina where we spent the night. Before dinner, we could relax (and clean ourselves a bit) in a temazcal (a mayan sauna). There, you sit in a small hot room, and can pour a mixture of hot and cold water (out of two buckets) over you – an interesting experience. 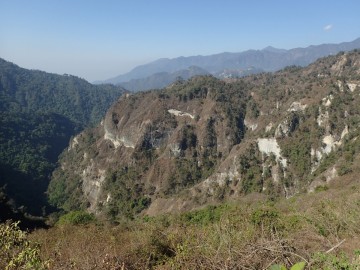 On the next day, the path was gently undulating at first, before we reached Record Hill. This hill can be climbed in about 20 minutes at normal pace. The record, however, is seven minutes. After hearing these numbers, originally I did not want to compete. However, everyone faster than 13 minutes was promised a free T-shirt. This time seemed possible to achieve to me. Therefore, I joined the race up the hill.

We started in two-minutes-intervals to prevent us blocking each other (as the path is rather narrow and does not really allow any overtaking). I started almost too fast and was soon breathing heavily. I caught up to the person before me quite soon, though. So, I knew that either I was very fast, or she was very slow. I decided for the former, and pushed on. At some points, I was very tempted to stop and enjoy the beautiful view. However, I reasoned with myself that the view from above must be even better, and kept going. 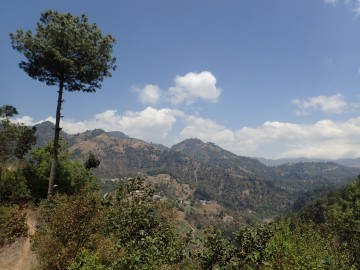 After reaching the top, I felt quite exhausted. Still, the others told me that I looked rather relaxed. As for my time, I had to rely on my camera (as the battery of my phone was dead). So, I took a picture both at the start and at the finish. However, my camera only shows full minutes (and no seconds), so I could only determine that it took me between 12:01 and 13:59 minutes. Still, I was promised a free T-shirt. (**)

This challenge was definitely a good way to get up Record Hill. Otherwise, the ascent would have dragged on much more. Anyway, we still had to get up Record Mountain after that (a further, less step ascent). After reaching its top, we got some ice cream as a reward – at least those of us that dare to eat ice cream in a developing country. Since a very negative experience in Taiwan, I am very careful about eating ice cream abroad. Consequently, I did not eat any. 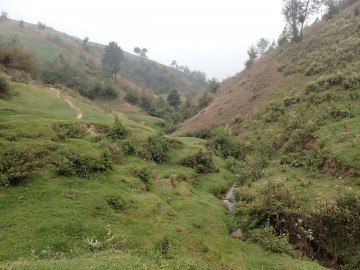 After that, the hike got a bit more relaxing – and also very scenic: along (mostly corn) fields, through the woods, and into a river valley, where we had to cross the river eight times on some stones. Finally, we had to face the Corn Field of Death. Luckily, it sounds more ominous than it actually is. Still, I was again very tired and went to bed quite early. 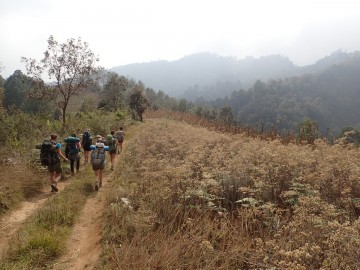 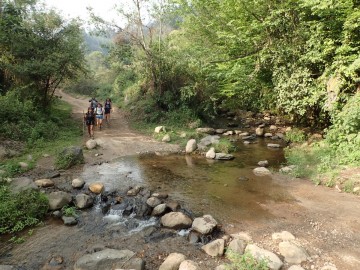 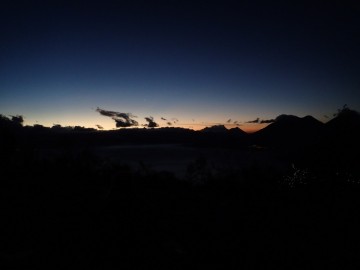 That was quite sensible anyway, as we got up at 3:30 a.m. the next morning. We then hiked up to a viewpoint over Lake Atitlán. The early start was well worth it, as both the night sky and the sunrise from up there were absolutely beautiful. 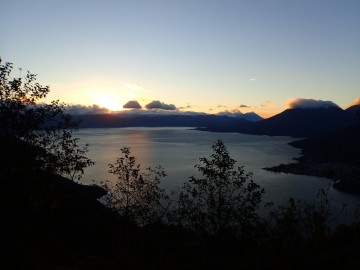 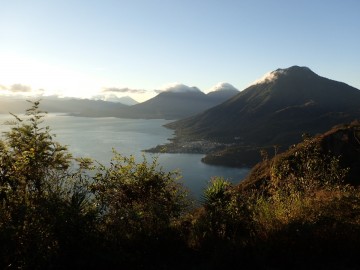 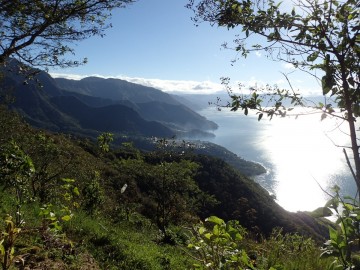 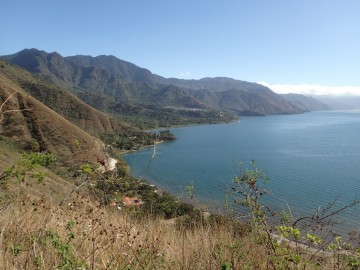 Around 7:30 a.m., a group of almost 50 (!) Israelis turned up. This was our cue to leave. We descended down to the lake, where we enjoyed some coffee (and/or fruit smoothies) at La Voz Coffee Cooperative in San Juan La Laguna. From there, we took a pickup truck to our final destination, San Pedro de la Laguna. After having lunch together at a restaurant there, it was time to say our final goodbyes. 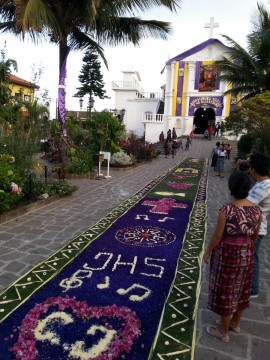 Alfombra in front of the church in San Pedro

San Pedro de la Laguna turned out to be very touristy: On my 15-minutes-long walk to my hotel, I only met other tourists on the street. This killed my desire for a walk through the city. Fortunately, three of my roommates (a Mexican woman and two Swedes) made me go with them. As it turned out, there are indeed some local people in the back streets. We even came across a few alfombras (artful carpets made from sand or flowers). Finally, we had dinner in a vegan (!) Mexican restaurant, which is owned by a very friendly and welcoming Mexican. So, I did end up having a nice evening in town.

(*) bread and/or nachos with beans, guacamole and a huge amount of vegetables (cucumber, carrots, peppers, tomatos, and onion) – so many vegetables in fact that one of our group said: So, if you are not guiding a hike, you are cutting vegetables.