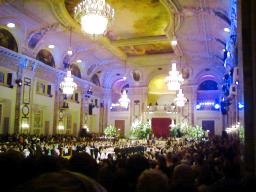 For the first time since 2006/07, I am spending a whole winter at home in Austria (in 2007/08, I was on holiday in south america, and last year, I was on my RTW trip). As winter (or, more precisely, the carnival time) in Austria is almost unthinkable without balls, it is more or less mandatory to attend at least one of these events.

Ball at the Imperial Palace (Hofburg)

Even though I no longer take any dancing classes (in fact, my last course was ten years ago), I still enjoy going to a ball every once in a while. Therefore, I took the opportunity this year to attended two balls in the Hofburg (the old Imperial Palace), which is of course an amazing location for such an event. There, I spent the night (yes, the whole night: Viennese balls last until early morning) dancing all kinds of ballroom dances.

For visitors to Vienna, it is highly recommendable to go to a ball during carnival season. All you need is

N.B.: "Alles Walzer!" is German for "Everyone waltz!", and is the traditional phrase for opening a ball, inviting everyone (and not only the opening committee that usually performs a rehearsed choreography at the very beginning of a ball) to the dance floor.