Today, I decided to use some other means of transport than usual: I biked the Old Coach Road, which was the link between the Northern and Southern rail branches (before completion of the train link in the early 1900s).

Surprisingly enough, this road was forgotten and fell into disrepair until it was "rediscovered" in 2002. Since 2010, it is accessible as a walking and biking trail, following the original coach route for most of the way. In between, you are closer to the "old" train route (before upgrading the railway line in the 1980s) with its impressive viaducts.

The trip itself is pleasant enough – even for someone without any real experience in mountain biking like myself. Especially helpful was the good-quality mountain bike I rented – quite a contrast to some other rental bikes, like in Lithuania. 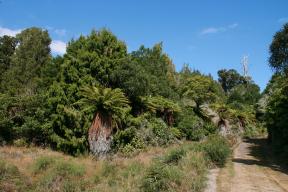 With a total length of about 18 kilometers (including the ride back into town along the Mangawhero River), it is easily doable in half a day. This way, I spent the afternoon relaxing a bit before my three-day canoe trip.