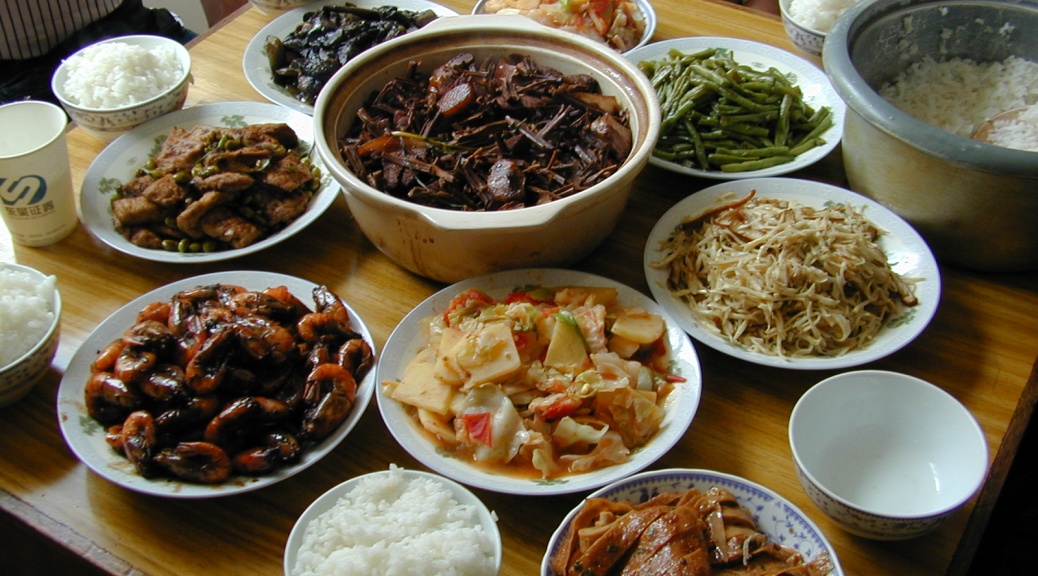 In fact, there is no typical Chinese food, simply because this country is so large (and thus so diverse) that the "typical" food varies quite a lot. However, I would like to present a few aspects of Chinese food in those regions of China that I visited.

It is quite common to eat in a group in China: Typically, you do not order your own dish. Instead, a common order is placed for the whole group. The dishes are then placed on a rotating glas plate in the center of the table. This way, everyone can pick whatever s/he likes. For Western tourists, who are not that familiar with this systems, it takes a while to get used to it. During this time of adjustment, you might place your drinking glas on the rotating plate, and before long it has been moved to the other side of the table. Even after that, you have to be careful not to place your drinking glass to close to the rotating plate. Otherwise, a protruding dish and/or serving spoon might knock it over. The problem with the serving spoon, however, seems only to exist for Western tourists: Chinese simply use their chopsticks to get the food from the communal dishes. In fancier restaurants, there are even two (color-coded) sets of chopsticks for this purpose.

When eating in such a setting, you also notice the importance of meat dishes: They are typically served before the vegetable dishes. Some of the latter can be quite tasty, others (especially the cooked greens) may be a bit boring after a while.

Even in vegetarian restaurants, meat playes a certain role: The cooks pride themselves in being able to immitate meat dishes with purely vegetarian ingredients (at least in appearance, if not in texture and/or taste). While this strange phenomenon of immitating meat dishes is also known in the Western world, it is still just that, in my opinion: strange.

In short, as a vegetarian you might encounter some obstacles in China. This is also illustrated by the following experiences: When we were having a group breakfast, our guide assured me that all dishes are vegetarian: We do not eat meat for breakfast in China. The next day, he took us to a typical Chinese eatery where also the locals come to eat for breakfast – where the only dish was beef soup.

At another occasion, in a hotel at the breakfast buffet, I discovered some egg fried rice. I was just about to take some when I noticed small, but quite numeruous chunks of ham in the rice (probably to "enhance the flavour").

On our second night in Beijing, we were exploring the city without our guide. After a long search, we finally discovered a fast food restaurant in a subway station. Surprisingly enough, the proprietor spoke decent English. So, he could tell us all about his great choice of chicken and beef soup, as well as the beef and pork noodles. When I asked for a vegetarian dish, I was told that indeed they have one: Egg and tomato (one of the typical vegetarian dished in China). When I enquired for something else, like rice with vegetables, he answered with a smile on his face: Of course, rice with eggs and tomato! 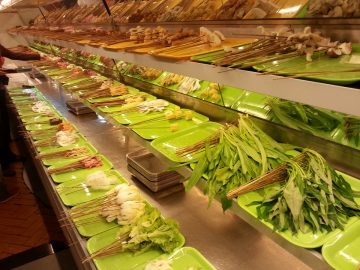 Skewers for the Hot Pot

Only once, I had a distinct advantage being a vegetarian: at the Hot Pot restaurant. There, you boil your food yourself in a large pot of soup directly at the table. While it was challenging for me to get enough to eat, I did not experience any after-effects the following day (in contrast to some of the meat eaters). 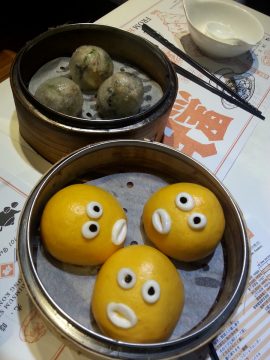 For me, the culinary highlight were the Dim Sum in Hong Kong. At DimDimSum, a small restaurant without a really helpful English menu, our choices were still a bit hit-and-miss (and we also inadvertently mixed savory and sweet dishes). The Dim Sum at Din Tai Fung, however, were absolutely delicious – that delicious even that I rearranged my sightseeing program on my last day so that I could return there for lunch. 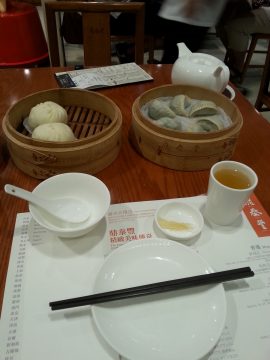 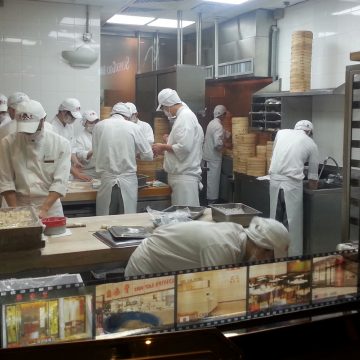 The title image of this entry is from Wikimedia Commons (© ZiCheng Xu, License: CreativeCommons by-sa 2.5).