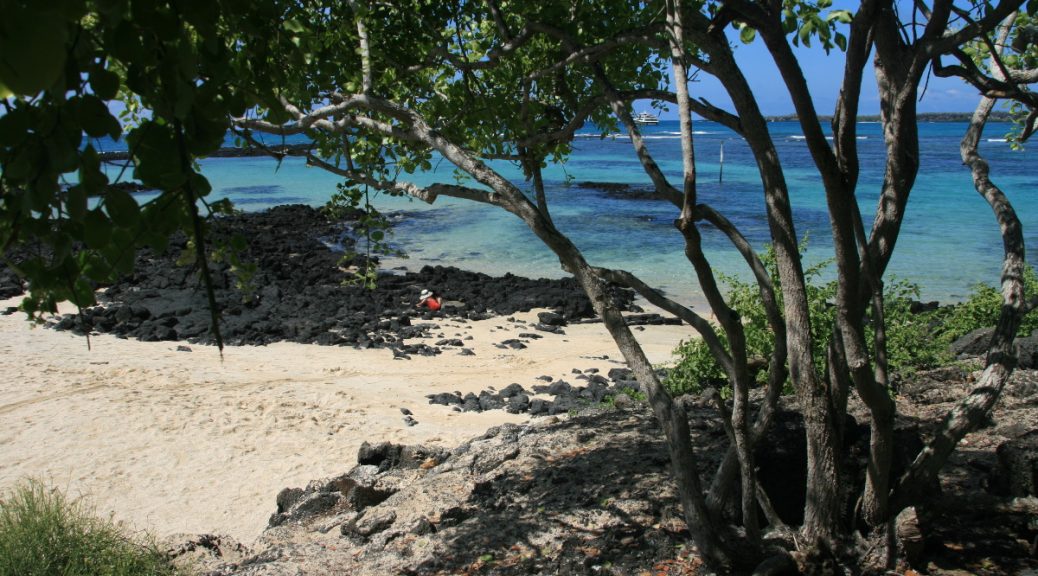 The Galapagos islands are usually not a destination that you visit for relaxation. However, having to cope with yet another climate zone, I decided to take it easy the first two days there.

At first glance, the temperature difference between the mainland (with about 20° C maximum temperature) and Galapagos (about 27° C) is not that big. However, in Galapagos, it hardly cools down even at night, and it is rather humid. This is quite a change from the mountain climate around Quito. 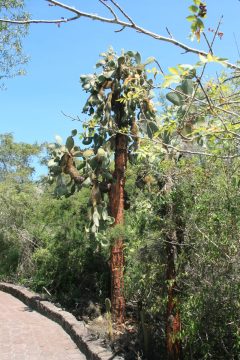 So, on the first afternoon, my explorations were basically limited to the drive from the airport to my accommodation, and a short walk around town. But already that gave an impression about the diversity of the different natural environments around here: The airport on Baltra island lies in a semi-desert environment, with some thorny scrubs and a few cacti. The hinterland of Santa Cruz (the main island) is lush and green. Finally, around Puerto Ayora (the main town), I later found lots of (quite large) Opuntia cacti. 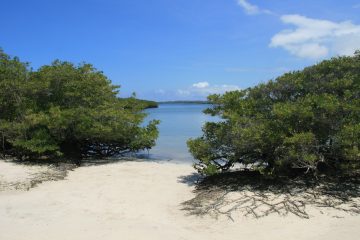 However, I did not see these cacti until the next day when I paid a visit to the Tortuga Bay. There, you should be able to observe some sea turtles (as the name suggests). Unfortunately, the waves were too high, so swimming was prohibited. Therefore, I had to limit myself to the observation of marine iguanas and Sally Lightfoot crabs. Finally, I could also cool of a bit in a shallow, sheltered lagoon close by. 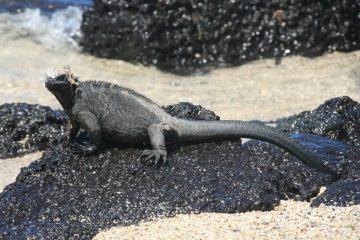 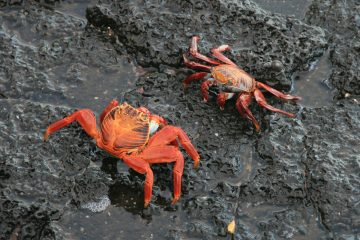 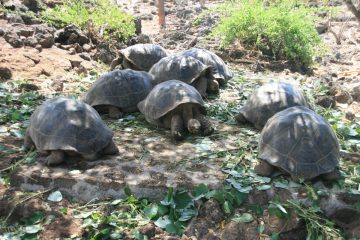 Before that, I visited the Charles Darwin Research Station. There, I could see some species of tortoises in captivity. The ones living in the wild will (hopefully) follow on my upcoming cruise. Some Galápagos sea lions and brown pelicans finally introduced themselves to me at the local fish market. There they are fed with fish offal, which is of course a huge attraction for them. 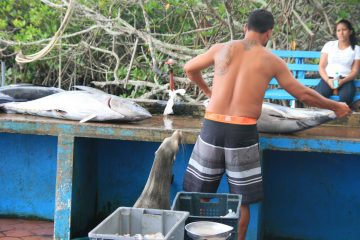 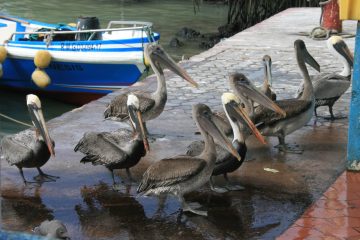 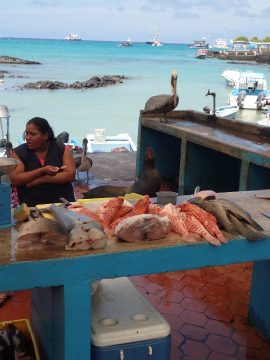 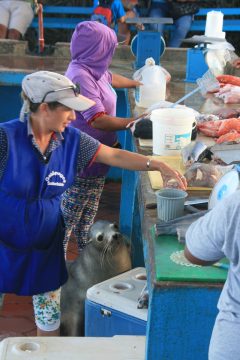 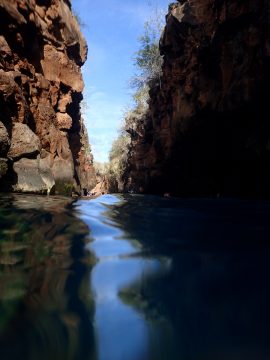 On my second full day in Galapagos, I finally got used to the weather. Fortunately, it was also a bit windier, and therefore not that humid anymore. Still, I did not go on a day trip, as they all start very early (and I did not want to commit to a full day of activity before). So, I stayed close to town again. I took the water taxi to Las Grietas, a crevice filled with brackish water where you can swim and/or snorkel. The fauna may not be that exciting (only a few larger fish), but the sunrays falling into the water create a very special light. 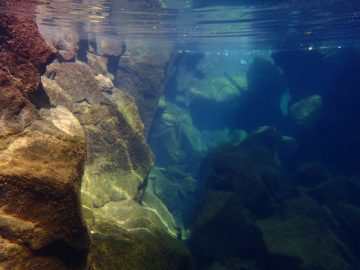 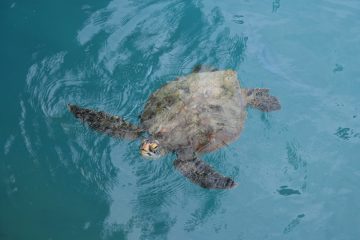 On a nearby beach, I also snorkeled with a few (small) reef sharks for the first time. I saw my first sharks (together with a ray and a sea turtle) already around the pier before the departure to Las Grietas. Directly on the pier, you can also sometimes spot some sea lions making themselves comfortable. 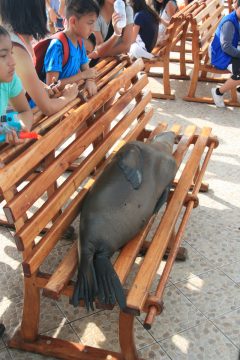 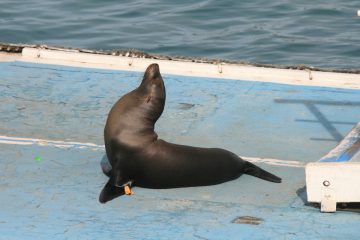 Sea lion at the pier

In the afternoon, I went on a half-day tour by boat around the bay. Our first stop was again Las Grietas. As the sun was higher in the sky, the sunlight was even more dazzling. It has been (much) quieter in the morning, though. 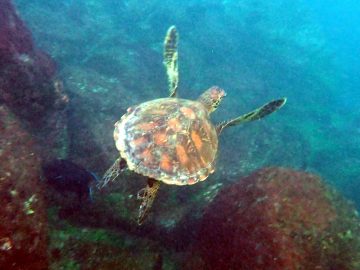 Afterwards, we went snorkeling off the coast. We were able to observe some sea turtles feeding (despite a surprisingly murky sea). I was also lucky enough to be the only one in the group to spot a white-tip reef shark (for a very short time). 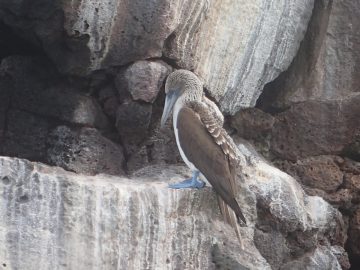 The two subsequent stops were not quite as impressive in terms of animal spotting. Still, I was able to see (both blue-footed and Nazca) boobies up close for the first time.

Apart from the small number of blue-footed boobies, I have already seen quite a bit of wildlife over the past two-and-a-half days – and my cruise to the more remote islands, where the wildlife is supposed to be even richer, is yet to come. 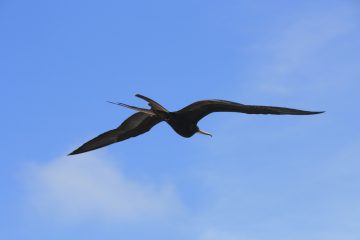 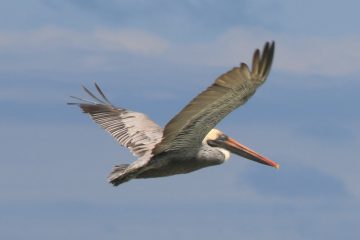