This weekend, the Open House Vienna was held for the fifth time. During this event, one can get an insight view of some buildings that are normally closed to the public. I took this opportunity to visit a few well-known buildings.

My first stop was mainly chosen because of the beautiful view from the 20th floor: the Vienna Ringturm. Apparently, many others had the same idea: When I arrived there shortly after the official opening time at 10.00 a.m., a long queue was already waiting in front of the entrance. In the end, I had to wait for around 45 minutes. This might seem a bit excessive when you compare it to the maybe five minutes we could spend on the top floor – but the view from there is really nice. 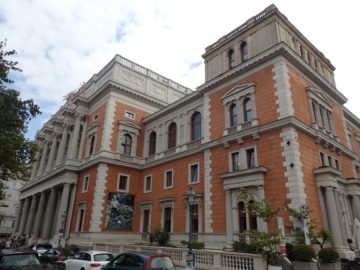 At my next stop, the former stock exchange building, the ratio of waiting to visiting time was already more balanced: about 30 minutes each. Inside, I was surprised to find a courtyard in the style of the 1950s (designed, by the way, by the same architect as the Ringturm). As it turned out, the old huge stock exchange hall burnt down at that time, and was then replaced by this courtyard. In other parts of the building, though, you can still see the magnificent architecture of Theophil Hansen.

Courtyard of the Börse

Interior of the Börse

After lunch, I turned my attention to a builing I was already fascinated of as a child: the “Republic Kugelmugel“. This sphere-shaped building has not only a rather extraordinary shape, both also a quite eventful history. Nowadays, it is used as a museum and art gallery. 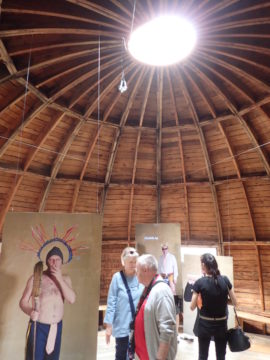 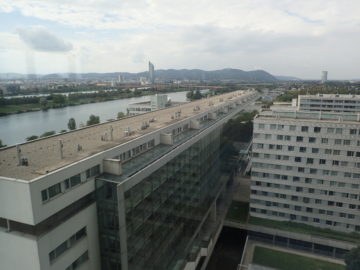 I finished my short excursion with another very nice view, namely that from the Ares Tower in the so-called Donaucity. Unfortunately, the owners of this office building are obviously too successful in renting out their offices: The only empty office (which we could therefore visit) was on the eleventh floor (out of a total of 24). But even from there, you have a great view over the Danube and the city center of Vienna – at least from the prime office rooms at the front of the building.