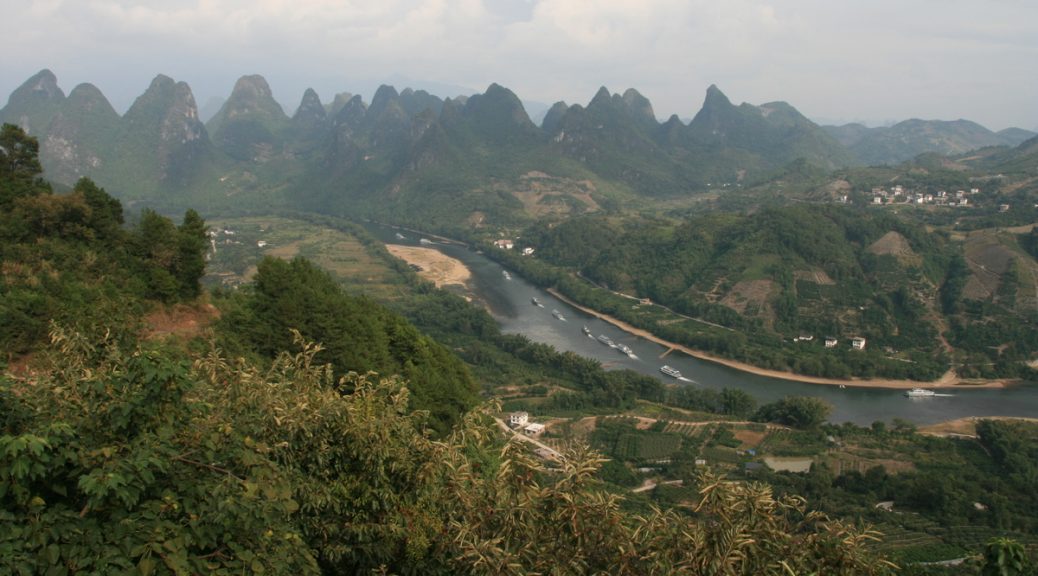 The karst hills of Yanshuo are indeed extraordinary – I have never seen anything like it. The numerous hills are dotting the landscape, in seemingly endless rows, one after the other. We have explored this region by bike and on some short hikes.

Our bike tour led us along the Yulong River, a tributary of the Li River. Some of our group also took a bamboo raft on the river for one part of the way; I only enjoyed the views from my bike.

We finally arrived at the foot of Moon Hill, where we had lunch. After that, we climbed to the base of the nearly circular hole in Moon Hill (which also gives this hill its name). Even though the ascent only took us about twenty minutes, it was basically all stairs. With the heat and the high humidity, this was a sweaty affair. 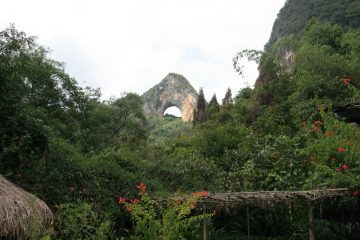 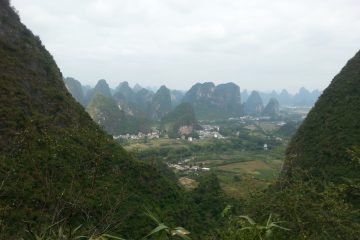 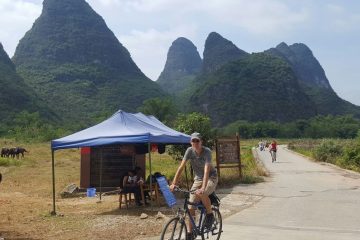 Then, we visited the Gold Water Cave (which was recommended to us by our guide). The stalactites and stalagmites of this cave are brightly illuminated in all colors. Our local guide rushed us through this part of the cave anyway, though. After bypassing crowds of Chinese tourists (and after passing some underground souvenir shops!), we finally arrived at our main destination: a mud bath. Naturally, this was a rather slimy affair, but it was quite fun floating in the mud (which seems to be quite dense, as you could float like in the Dead Sea). Afterwards, a cool shower and some hot pools gave us the possibility to wash off (most of) the mud again. 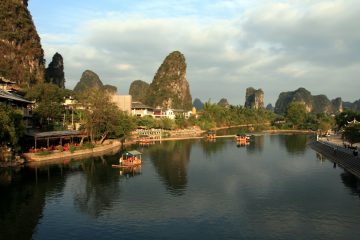 After that, we had to bike back to town. This, however, turned out to be more difficult than expected: Already in the morning, one of our group had some problems with the loose pedal of her bike. After she had swapped bikes with our guide, the bike finally lost its pedal, and had to be replaced. On our way back, though, one of the bikes even lost its rear wheel. Luckily, this happened while we were stopped, so nobody got hurt. Still, the bike had to be fixed at a local workshop. After the man there was able to replace the missing bolt, we could continue our cycling trip on the main road into Yangshuo – which was an adventure in itself: Especially close to the city center, everyone seems to drive where he wants. So, we had to negotiate our way through cars, motorbikes, lorries, and other bicycles (some of which were driving on the wrong side of the road).

Finally, we all managed to arrive safely at our hotel. We even had about half an hour before some of us (including myself)
had to leave again for the Light Show "Impression Sanjie Liu". After being picked up, we drove for maybe five minutes before being stuck in a traffic for about half an hour – the show is very popular indeed. Luckily, we (almost) managed to get to our seats in time. The show was pretty impressive, with a very large cast, in a stunning setting (in front of the surrounding mountains, directly on the Li River). It tells the love story of Liu Sanjie, and also gives a glimpse of the customs of the local ethnic groups. 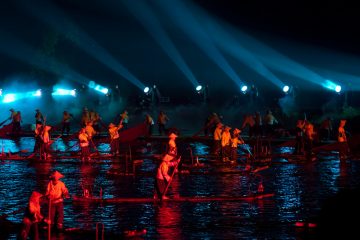 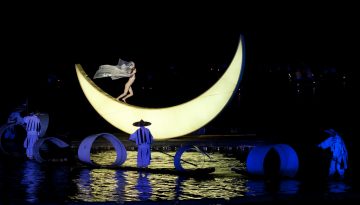 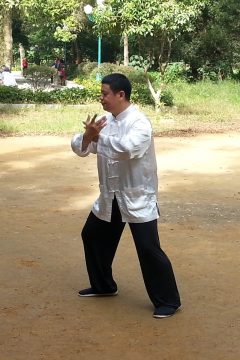 Our second day started with a taiji lesson for me and one of my fellow travellers. Beforehand, I had been told that the "typical" Chinese taiji teacher is rather strict and does not explain anything at all. In contrast, our teacher explained the movements very patiently (and was also quite easy to please). So, it was a nice and relaxing hour in the park.

After that, we went on a tour through the surrounding area. First, we stopped at a tea plantation, where we would have been able to pick some tea leaves if it had been the right seasons. Unfortunately, we were about a month early, so there were hardly any leaves ready to be picked.

Therefore, we simply went on a stroll through the plantation, took some pictures of each other in our typical tea picker’s outfits, and finally enjoyed a tea ceremony during which we could taste some of the local tea. 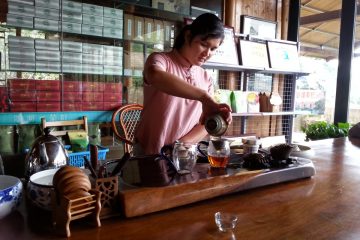 Next, we made a short stop at Xianggong mountain, from where we had a fantasic view of the Li River and the surrounding karst mountains. Then, we also visited an ancient stone village. This village was deserted by the last inhabitants only in 2013; now it is a ghost village. It was quite fascinating to see how nature is already taking over again. What is more, the way of building these stone houses (without any mortar) was also quite remarkable. 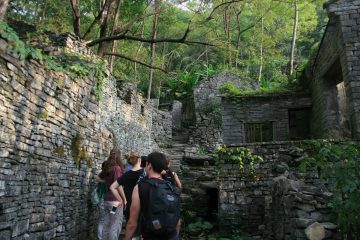 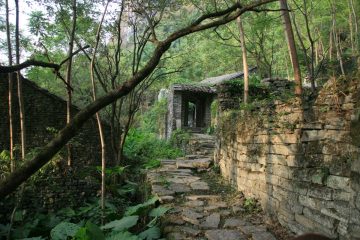 Finally, we ended the day watching the sunset over the karst hills. Even though the sun was actually hidden behind a cloud, we got to see a quite nice sunset. 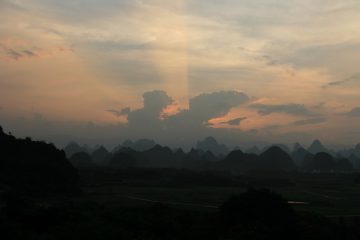 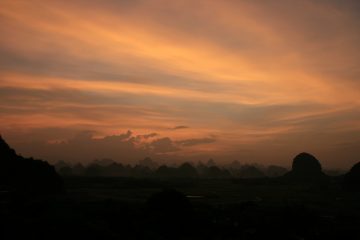